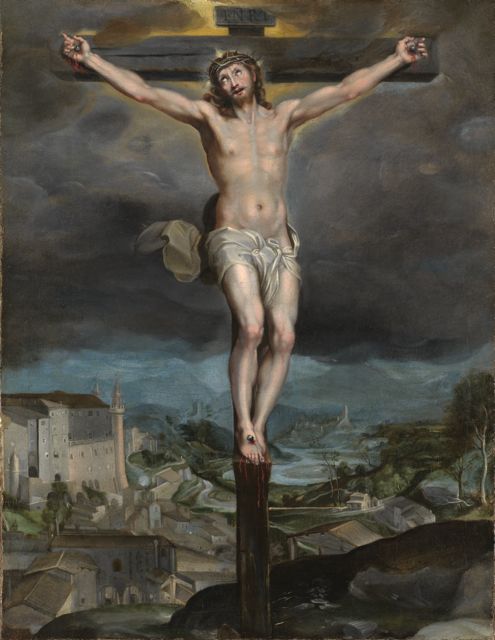 The Christ expiring on the Cross

PROVENANCE:
Probably the bozzetto described by Bellori as the ‘Christ expiring on the Cross from Barocci’s hand’ that was placed in his coffin at his feet when his body was taken for burial in San Francesco, Urbino;
Private collection, New England.

We are grateful to Prof. Andrea Emiliani, Dr. Nicholas Turner and Dr. Ted Pillsbury who have each independently confirmed the attribution on first hand inspection of the painting.

This is the ‘bozzetto a colori’ for Federico Barocci’s Christ expiring on the Cross, the large work finished by the artist for Duke Francesco Maria II della Rovere in 1604, and bequeathed by him to King Philip IV of Spain in 1631. Dr Nicholas Turner writes that ‘the handling is of the highest quality and the variations in detail from the final work [are] totally absorbing’.

The commission, like many of Barocci’s altarpieces, was obviously produced over an extended period – the Presentation of the Virgin in the Temple done for the Chiesa Nuova in Rome took from 1594 to 1603, and the finished bozzetto a colori represented the most elaborate stage in the preparation of the composition. Barocci was tremendously attached to the naturalistic representation ‘as he worked made constant reference to nature, and did not allow himself a single stroke without looking upon it; a procedure that is confirmed by the large number of drawings that he left in his studio’ as Bellori tells us. The transfer of his design to the final canvas was a tremendously complex process, for he not only used a squared grid to move a design from one format to the other, it is also clear that he must have employed a proportional compass to reduce or enlarge proportions. He would often work from clay or wax models, as Bellori describes: ‘Once the [compositional] drawing was finished, Barocci made clay or wax models of the different figures, these were so beautiful that they seemed to be by the hand of the very best sculptor. Sometimes he was not content to make just one model of each figure, repeating it two or three times in wax. After clothing the figurines to his taste, and contenting himself that they looked well, he would then clothe the live model correspondingly, in order to remove all trace of artifice from his work.’  He would then proceed to a colour sketch for the whole composition, or a monochrome sketch in gouache, and then proceed to the cartoon, which would be the size of the final work. The design would be incised or pressed on to the prepared surface of the canvas. This was a labour intensive process, but one that enables the artist to employ assistants to work out parts of the design and yet keep overall control of a composition in which at all stages there was a possibility of refinement and correction, so much so that frequently the oil on paper sketches of individual heads were inserted into the final painting, superimposed on the work done on the canvas itself. Often the reduced replicas would be made with a blind stylus, so that the lines would not be ain any way visible, and the grid would be in the form of thread that would accurately reduce all the proportions. All the indications are, however, that the aim of the exercise was to produce as realistic an image as possible, with life-like accents of birds and animals to engage the attention of all the audience that might see such an amazing piece of artifice.

There are in existence numerous drawings for the figure of Christ, most of them conserved in the Kuperstichkabinett of the Staatliche Museen, Berlin  (see A. Emiliani, Federico Barocci, 1985, p. 360 362), and a single drawing of the landscape, in the Ubaldini collection in the Museo Civico, Urbania .

There are considerable differences between the bozzetto and the finished picture, whose landscape ends at the doorway to the left, while the little turret and the end of the apse of the Duomo are shown to the left, with the rounded projection of the chapel of San Giovanni Battista. Prof. Emiliani has observed that Barocci includes all the detailed features of the buildings up to the Ducal Palace, starting from the slope down to Data and the first bastion, the convent of St Catherine. There is the quarter of Valbona, with a whole variety of houses and the Palazzo Palma. The causeway in the middle distance is the perimeter of the Mercatale, the landfill that is in front of the Palazzo where the market took place and which in the Cinquecento was the piazza d’armi where parades took place. At the right is the little church of San Rocco, which was only demolished in 1910. There is much more of the group of buildings to the right in the bozzetto than in the finished altarpiece, because the elevation which supports the Cross is a larger element there; the hill seems to show some indications of the structure of the wooden barn to the centre right. The beautiful elevation of roofs in the hillside leading up to the Palazzo Ducale is one of the most beautiful passages in this landscape, at once one of the first real landscapes in the Italian tradition and one of the most modern prospects of architectural fantasy. It is interesting to see the observation of the rows of arches supporting the roadway up to the Palazzo alternate in the drawing, a study that was clearly used in the creation of the bozzetto. In the centre of the cityscape is the ‘Palladian’ façade of the New Synagogue, built in the second half of the Cinquecento, while under the façade of the Ducal Palace is the bastion designed by the mathematician Francesco Commandino. The Risciolo valley that forms the backdrop to this scene of contemplation is presented a little more imaginatively, so that the Metauro river looks more like a lake; in the distance are the Monti Petrano and Catria, referred to by Dante.

This is an intensely personal landscape, for it is taken from the vantage of Barocci’s own house in the Via di San Giovanni, and there is something immensely touching about the inclusion of the suffering Christ on the Cross as the only living being in this extensive prospect. Barocci’s poor health meant that he spent many days and months confined to his room, for he suffered permanently from an ulcer ever since his visit to Rome where he was convinced he had been poisoned, and rather than in bed he sat always at the window. Visitors and agents of his patrons who came to entreat him to finish their commissions, could only wring their hands at his frailty. It is a plausible suggestion that this bozzetto is the Crucifixion ‘from Barocci’s hand’ that was placed in his coffin at his feet when his body was taken for burial in San Francesco, Urbino ‘Gli fu data sepoltura nella Chiesa di San Francesco: e con pompa funebre fu esposto il suo corpo, ed a’ suoi piedi nel feretro, collocato un quadro del Crocefisso spirante di sua mano’. Christ expiring on the Cross is the title by which the Prado picture was always known, and Bellori’s reference can now be realistically associated with this very personal canvas.

Dr Turner notes that the Christ expiring on the Cross differs from the two earlier representations of the Crucifixion (Galleria Nazionale delle Marche, Urbino 1566-67, and the Cathedral, Genoa – 1590-97) in showing the Saviour still alive, raising his eyes heavenward as he expires. It was one of Barocci’s most inspirational compositions, which was a powerful source for both Guido Reni, as in the large picture he did for the high altar of S. Lorenzo in Lucina (but in many other works too) and also for Van Dyck.