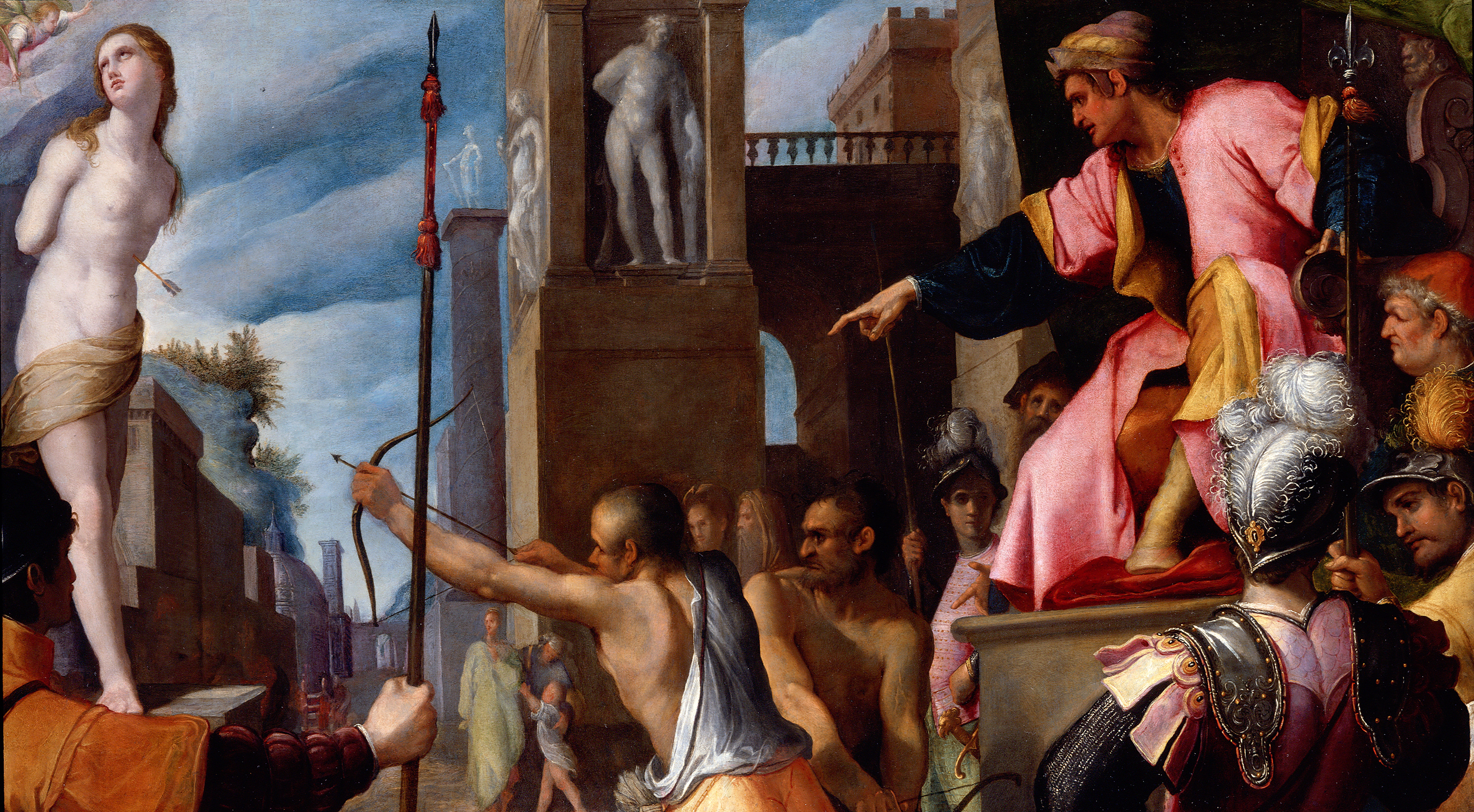 This important panel is an exceptional work by the Florentine painter Paladini,  whose style was formed in the years of Francesco I’s studiolo and at the very interesting moment of the beginning of the reform of painting undertaken by Ludovico Cardi, called Il Cigoli,  Alessandro Allori and Santi di Tito.  Enrolled in the Accademia del Disegni in Florence in 1576, he was obviously well matured in the world of the Studiolo painters, and absorbed a lot of the novel effects of colour that came from exposure to Venetian painting. But all this was interrupted by his involvement in a fracas in Florence in March 1586 where he was in disguise with false beard and moustache attacking another Florentine. Not much has ever emerged about the precise circumstances of his wrongdoing, but it was sufficient for him to be sentenced in his absence to three years in prison. Arrested finally in January, he was sent in custody to Pisa, and thence to Malta to the galleys. There his work came to the attention of the Grand Master of the Order of St John, and he was able to work as a painter on the island until he was released in 1595.  Although he thought he might obtain a pardon his freedom was much to the displeasure of Grand Duke Ferdinando, who continued to press for his return to custody.  By the end of the century, however, he was in Sicily, and his career was thereafter on the island, and he was the most prominent artist there, working in Palermo, Catania, Messina and other places: so much so that he came to the attention of Caravaggio who recognized his talent, regarding all the other artists there as mere ‘carte da gioco’ or playing cards. There is a period, between 1595 and 1600, when Paladini may have attempted to return to Florence, and a clandestine visit to Tuscany could explain some of the novel forms found in contemporary painters that are echoed in his work.

Although there is no indication of where this picture was commissioned for – and it is exceptional for being painted on panel, while the great majority of the paintings Paladini did in Sicily are canvases – there are a number of preparatory drawings for it in his two albums of drawings in the Museo Nazionale di Palazzo Bellomo in Siracusa. Mistaken for the subject of Saint Sebastian, these are now recognized to be preparatory to this work, and indeed some of them also relate to other works by Paladini in Sicily, like the Martyrdom of Sant’ Agata in Catania Cathedral.  We are grateful both Dr Ludovica Sebregondi and Dr Alessandro Nesi for separately confirming the attribution and for identiifying the painting. Unknown to Paolo Russo, the Soprintendente in Enna, and author of the latest monograph on Paladini  (“Un genio vagante … in giro nella Sicilia’ Filippo Paladini e la pittura della tarda maniera nella Sicilia Centrale, Palermo, 2012) it has now been recognized also by him, and by Gioacchino Barbera, the Director of the Galleria Nazionale della Sicilia at Palazzo Abatellis, Palermo.

Santa Cristina was a Roman saint put to death under the emperor Diocletian at Bolsena, and she had quite a wide following in Italy and abroad. Condemned to be executed by being shot at with arrows, she survived only to be weighed down with a millstone in the lake. Her remains were rescued by Matilda of Canossa and venerated in Bolsena , and there were numerous churches devoted to her cult, both in Florence and in Sicily, where there is Santa Cristina Vetere in Palermo. The classical references are a clear echo of classical coins and medals, the profile on the right  (repeated on the right hand side of the Catania altarpiece with Sant’ Agata) is a quotation from Roman sources, like that of Nero or Vespasian in contemporary medal anthologies, such as Sebastiano Erizzo’s  iDiscordo …sopra le medaglie degli antichi…, Venice, 1559.  But the horizontal format of the panel, and the unusual painted edge, indicates a different location than the typical altarpiece, and it must have come from a sacristy or a confraternity dedicated to her. The references to Florence in the background with the Baptistery, and Giotto’s tower, give us an indication of how Paladini traded on his roots: together with his quotations of Trajan’s column and the Farnese Hercules, it gives an idea of how exceptional his cultural attributes were in Sicily.  A small picture with Santa Cristina is recorded in the Seicento at Palazzo Branciforte, in Palermo;  but it is not known if this was connected to this undoubtedly important commission.

The panel, a characteristic piece of Florentine craftsmanship from the tradition of Vasari and Bronzino, is formed of upright planks held by two horizontal battens. The stability of the wood is also maintained by the coat of paint applied to the back, with horse hair incorporated, which has ensured that the natural curvature of the surface is reduced to the minimum, and the painted surface is completely stable.