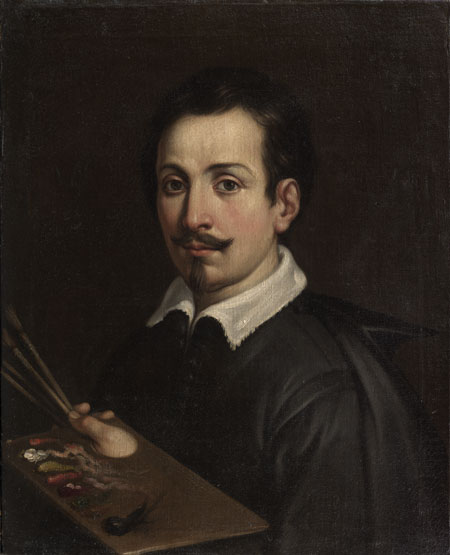 The original canvas is inscribed, underneath a letter dated 1621:

PROVENANCE:
Sent to Bartolomeo Coriolano in 1621 (?), as documented by a letter of 2 April that year attached to the back of the unlined canvas, with its original stretcher. The original frame had a Seicento label ‘Guidus Bolognesus / Ritrato and in charcoal “Guido” and the inventory number ‘20’;

(On the reverse, visible between the lines, the address to)

It is very exciting to have discovered conclusive evidence of Guido Reni’s self-portrait painted at the outset of his Roman career. The painting has always been known as a portrait of Guido Reni, bearing old Seicento labels to this effect, and it has the same features as Ottavio Leoni’s drawing of 1614 (Private Collection, Bologna). The letter that has accompanied the painting since 1621, and until recently attached to the back of the unlined canvas, describes the portrait of Guido Reni, and mentions that it was painted when the artist had a small moustache.

The painting was obscured by centuries of grime and an uneven surface, due to the presence of the letter, attached directly to the canvas. The inscription in capital letters was largely under the area covered by the letter, and it became fully legible in infra-red photography. It confirms what was already indicated in the letter, that this is Guido’s own self-portrait, sent to be delivered to his mother Ginevra de’ Pozzi in Bologna. From the letter we also learn that the portrait was coveted by the secretary of the Borgheses, almost certainly this was Ferrante Carli (1578-1641) who had come to Rome at the same time as Guido, also to work for Cardinal Sfondrato at Santa Prassede. The range of colours on Guido’s palette is a fascinating insight into his working methods, at a time when oil colours had only recently gained the ascendant from tempera, and the range of his palette with the light-grey ferraiolo or cape forms a convincing foil to the clear fleshtones and sensitive rendering of the eyes, cheeks and ear.

Stylistically, the painting is from the time when the Incamminati of the Carracci studio in Bologna arrived in Rome, in the wake of Annibale’s completion of the Farnese Gallery. They also included the extremely talented Domenico Zampieri, Giovanni Lanfranco Francesco Albani and Antonio Carracci, and Guido, slightly their senior,  was exploring the most modern techniques around, from Annibale to Federico Zuccari,  Barocci and Caravaggio. He was particularly taken with the latter’s sensational naturalism, and Malvasia says the Lombard artist accused him of trying to buy up his pictures in order to better understand his techniques.  No-one more than Annibale himself was able to capture the personality of his subject, but he did very few painted portraits, and Reni himself was to follow the same path, even though these instances show an incredibly sensitive interpretation of features and personality.

The picture has numerous pentiments, and the X-ray shows that it is painted over a close copy of Federico Barocci’s Stigmatisation of St Francis (Galleria Nazionale, Urbino). The head and outstretched arm of the Saint are visible to the naked eye to the right of the head, while Brother Leo is discernible in the lower left hand corner.  The enthusiasm for Barocci was strong in Reni’s patrons in the early years of the early years in Rome. Agucchi had accompanied his employer, Cardinal Pietro Aldobrandini, to Ferrara and Venice, and was as enthusiastic about Barocci as Cardinals Del Monte and Maffeo Barberini. We know also that Cardinal Sfondrato, Reni’s host at the convent of Santa Prassede in 1602/1604, was trying hard to secure a Barocci painting from Duke Francesco Maria della Rovere in Urbino, through his agent in Rome, to whom he offered Raphael’s portrait of Julius II (the painting now in the National Gallery, London) in exchange.  There was a considerable activity in Rome copying earlier sixteenth century paintings (apart from Rubens’s well-known inclination to study the Italian masters), and Guido himself contributed a copy of Raphael’s Santa Cecilia in Bologna to her chapel in San Luigi dei Francesi., while Caravaggio evidently also did one after another Raphael altarpiece before he managed to establish his own identity.

This is very much a personal record and Reni evidently hesitated with the composition, because the hand was originally shown without the palette and coming out of the sleeve, which had more substantial presence. The brushwork is already very assured and it is identical with that in the few portraits we know, as we can see from the Galleria Spada Cardinal Bernardino Spada of 1630, and indeed the portrait of Madonna Ginevra herself, in the Pinacoteca Nazionale, Bologna, which is a work on the same scale. These works show the incredible innate sensitivity for light modelling the human form that is the hallmark of Guido’s remarkable style, always very telling but rarely seen in such a perfect state of conservation as in this still unrelined canvas. It is probably the only self-portrait that he did, the various likenesses with the broad-brimmed hat (like the one acquired for the Medici on 1690 now in the Uffizi) being derived from a lost original or a portrait by another painter.  The present work does suggest that the so-called Self-Portrait in the Capitoline Galleries, which is also accompanied by a lengthy inscription, may also represent Guido at a slightly earlier date. He was incredibly sensitive about his appearance, the sources refer to his angelic features as a child, but he rapidly became bald, and Leoni’s 1614 drawing shows him with a hairline that had receded far. An anecdote that Malvasia recounts speaks of an encounter with the Pope who allowed him to keep his hat on, and this became a kind of trade-mark.