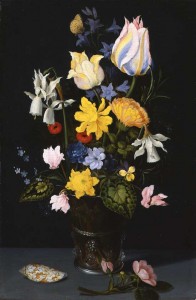 A Still Life with Flowers in a Glass

in the same family since the 19th century

A small group of exquisite paintings with particular characteristics have been assembled under Johannes’s name by Dr Claus Grimm, author of the major study of Flemish still-life painting, (Still-life, the Flemish, Dutch and German Masters, Stuttgart, 1990). The works are all small upright flowerpieces on panel or copper, with a distinctive choice of flowers and handling of brushwork, often almost in relief. Only one of these is signed, and Dr K. Waterman (Masters of Middelburg, Amsterdam 1984, p. 44) had already surmised that there may well be others among the unsigned paintings, and ones which have gained signatures of Bosschaert or Balthasar van der Ast.

Johannes, Hans or Jan van der Ast (the documents of around 1615 give these variations) was the eldest brother-in-law of Ambrosius Bosschaert the Elder. His activity was overshadowed by that of Bosschaert, but obviously preceded that of his younger brother Balthasar (1593/4 –1657) who was also a pupil of Ambrosius. Dr. Grimm considers A Still-Life with Flowers in a Glass, the present work, as dating from around 1610, and it is therefore one of the earliest examples of the flowerpiece tradition that Jan Breughel the Elder invented. However, the earliest datable example by Breughel seems to be Vase of Flowers, 1606.

The flowerpiece tradition had a clear start in the patronage of Cardinal Frederico Borromeo of Milan and Cardinal Francesc Maria Del Monte of Rome. The impact of the few still-lifes by Caravaggio, including the Ambrosiana Basket of Fruit, and the bouquet in The Luteplayer executed for Del Monte, was considerable for Northern painters. It should be remembered that it was the enthusiasm for Flemish realism that inspired this episode in Italian taste. Dr Fred Meijer (who still believes that the present work is by the hand of Balthasar) notes that Ambrosius Bosschaert acquired the Flowerpiece, Vase of Flowers , by Jan Breughel the Elder, which he dates to circa 1606/7. Dr. Meijer has demonstrated through written communication that this small painting remained in Bosschaert’s studio as a model for a generation of Middelburg Painters, with some of the flowers and cyclamen leaves being repeated in other flowerpieces by a number of hands active in Bosschaert’s close circle.

The small painting on copper by Jan Breughel the Elder (22 x 13 cm) in the Staedel, Frankfurt, which has a looser composition than A Still-Life with Flowers in a Glass. However, it is evident that van der Ast used it as a model for the cyclamen leaves, the large tulip, and some of the other flowers in this painting.

This work was evidently a crucial example of Flemish art, for, the experience of Italian naturalism was enriched by the preciosity of recollection and skill that distinguished the extraordinary school which developed in the North, quite different from the more decorative interpretation held by tradition in Italy. Because of the expense and rarity of many cultivated plants, floral bouquets were unusual, and were regarded as rare and delicate items in both their natural and painted forms, on a par with gold, exotic shells, gems, fragile glass and porcelain. These flowerpieces typically include flowers from different seasons and places, making an enduring monument rather than a fleeting impression.

It does seem that Johannes’s activity precedes the custom of adding the artist’s signature, with the single known exception of the work that formerly belonged to the Evert Douwes Gallery in Amsterdam, and is now believed to belong to Jan Laverge, Richmond (fig.3) which is consequently probably to be dated towards the end of his activity. The example illustrated by E. Gemar-Koeltsch, in Hollandische Stillebenmaler im 17. Jahrhundert, II p. 61, is mistakenly given the distinction of being signed, but it shares other characteristics with the refined panel Flowers in a Wan-Li Vase, and the blue and white Wan-Li vase of the Douwes painting (fig.4).

Another work by Johannes van der Ast which shows similar characteristics to A Still-Life with Flowers in a Vase, is the small panel formerly with Douwes in Amsterdam (GD8935). Special note should be drawn to the identical treatment of the blue hairbells specifically in these two paintings (the Douwes GD 8935 and the present work), but also in that of the signed painting Flowers in a Wan-Li Vase (fig.3). These hairbells, and the leaves in a certain relief that are found in the present work, have been recognised in a number of paintings by Johannes van der Ast. It is also worth mentioning both paintings (fig.4 and the present work) depict similar vases.

Dr Grimm has added a number of other unsigned works to this group, including Tulips, that was auctioned at Sotheby’s, London, 12 July 2001, Lot 39, attributed to Ambrosius Bosschaert the Elder. This was one of the attributions that Laurens J. Bol had made to Johannes van der Ast (‘Goede Onbekenden’, Utrecht, 182, p.51, repr. fig.10). By contrast, the works of Johannes’s younger brother Balthasar are all apparently signed.

The painting has recently been cleaned by Patrick Corbett, London, and is in outstanding condition; it shows it original edges on all sides, and this somewhat vertical format is a shape that van der Ast was particularly fond of. The same shell appears in a number of other pictures from the Bosschaert studio, but the combination with the rose species on the ledge is unique.