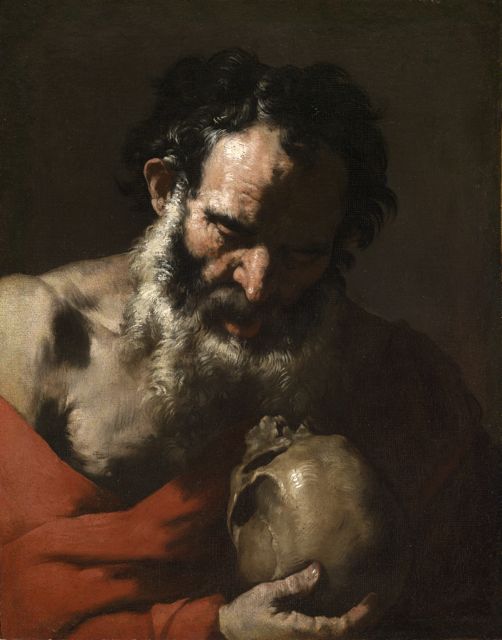 A Philosopher meditating on a Skull

This is a picture by one of the major figures in Neapolitan Seicento painting of the first half of the Seicento, who is now more confidently identified as the Valencian painter Juan Dò, born in Spain about 1604. His career and personality have been patiently worked out by Giuseppe De Vito, and now more recently by Andrea G. Donati (1). Admitted to the college of painting in Valenciain 1617, he trained there for five years before working another three years with Jacinto Rodriguez Espinosa, the father of the more famous Jacinto Rodriguez Espinosa. He moved to Naples, then part of Spanish domain, in the 1620s, marrying there in 1626, in the company of Vitale, Battistello and Ribera, and his choice of bride (Grazia de Rosa)  also seems to have placed him in the Caravaggesque profession in Naples, and  he joined Ribera’s studio first as an assistant and later as a colleague. He and his family seem to have perished in the 1646 plague in Naples.  Significantly he is recalled by the biographer De Dominici as the author of works that we were taken to be by Ribera himself, ‘especially some half-length figures and pictures of St Jerome, works in which the balance of colour and the working of the impasto were unique’ (2). Although the identity of the personality known as the ‘Master of the Annunciation to the Shepherds’ over the last fifty years has depended on a reading of signatures in less than an handful of works, the career and known personality of this major figure from Ribera’s circle does fit the character of the distinctive hand.

Many of the works established as coming from this very talented hand are indeed of the Annunciation to the Shepherds, and their interest in animals does suggest that the painter had experience of Roman painting, and notably the work of Salini as well as of the very naturalistic phase of Ribera’s output there, from 1612-18, as well as having obvious Spanish elements in his style, as suggested by the comparison with Velasquez’s Los Borracchos (Feast of Bacchus)  in the Prado.  Some of the subjects are dark and tenebrosi, but he does seem to have responded, like Ribera and Fracanzano (with whom his personality has sometimes been confused) to the need for more luminous colours in the 1630s. So while the work which originally prompted to name this artist, the Annunciation to the Shepherds  in the Birmingham Museum, is a dark composition, painted on what has become a characteristically Neapolitan coarse canvas, must be a work of the 1620s, the present work (which has been recognized as from this hand by Prof.  Nicola Spinosa) is from the mid-1630s, like the Return of the Prodigal Son at Capodimonte, which includes the same model for the old man, there illustrating the father of the Prodigal Son.

Another painting of the same Philosopher meditating on a Skull is in the Harrach collection, Vienna, (64 by 50 cm) (3) with the skull more central and the old man less inclined to the right. Andrea Donati (loc. cit.) has written about the engagement of this generation in the consideration of ancient philosophers, and their parallel role to that of modern scientist of natural philosopher. This is a field in which there was much inspiration from literature, and the visual meditation on the theme of death was as telling as Seneca’s mors omnia solvit,  Death solves everything. We have only to think of Hamlet, and his meditation on poor Yorick, to realize how this was a constant reflection in a society where mortality was perhaps a more commonplace occurrence.

We are grateful to Prof. Nicola Spinosa for confirming the attribution.

(3)  Recently included in the exhibition Unter dem Vesuv in the Liechtenstein Museum, Vienna 2008, No 9 (as by the ‘Master of the Annunciation to the Shepherds’