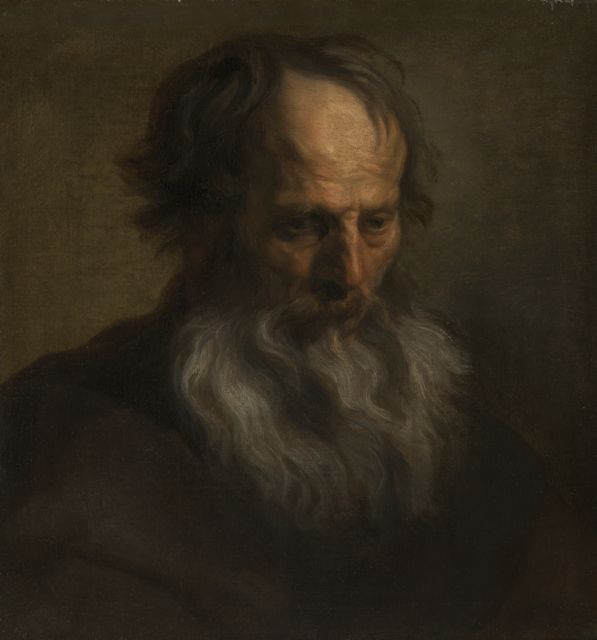 Study of a man with a grey beard

We are grateful to the Rev. Susan J. Barnes, Dr. Horst Vey and Dr. Hans Vlieghe for each independently confirming the attribution of the painting.

This wonderfully vigorous study of bearded man can be identified as the work labelled “A. V. DYCK” in David Teniers the Younger’s painting circa 1660 of a collection, now in the Schleissheim palace, Munich (detail right). It is not certain the Teniers gallery picture represents specifically Archduke Leopold’s collection, yet there are a number of works visible listed in his 1659 inventory.  In 1651 Teniers traveled to England on behalf of the Archduke to purchase paintings, on his return he went on to became official court painter to Archduke Leopold Wilhelm, painting his collection numerous times in gallery pictures like the one at Schleissheim. Archduke Leopold Wilhelm in ten years created one of the most important collections in Europe much of which came from the sale of the Duke of Hamilton in 1649 and also King Charles I – the collection later became the foundation of the Kunsthistorisches Museum in Vienna.

It is possible our painting was either seen, or purchased by Teniers, on behalf of Archduke Leopold, when in England in 1651. For the present painting also corresponds with a painting described in Van der Doort catalogue of King Charles I’s collection “ ..an old mans heade without a frame with gray haire & beard done by Sir Anthonie Vandike Bought by the Wijlt hi it Was prinz onlij – 1ft4 1ft, altered from 1ft 5 1-11”.

When Van Dyck arrived back in Antwerp in 1627, he came back from Italy with an innovative technique and ‘an inhuman appetite for work’ as Gustav Gluck observed. Twenty-two years younger than his teacher Rubens, he had little contact with him now, but a wealth of clients and commissions from institutions, burghers, the clergy and the nobility, who wanted him to paint all sorts of commissions, from religious altarpieces to portraits, and secular subjects, now appreciated for their own sake. Rubens’s absence from 1628-1630 may have given more scope to the younger man, but he was indefatigable, and there were many who appreciated the innovations he brought in technique, and his confident touch, more than the subjects he represented. He brought with him naturally the sense of experience of the recent Italian artistic world, which had seen some of the most revolutionary artistic developments since the Renaissance, already famous through the works by Raphael, Titian and the Bolognese, that had filtered through to Northern collections and public apreciation. Much emphasis has been placed on his experience of artists like Giulio Cesare Procaccini, a painter of Bolognese origin but active in Lombardy, but in practice the Italian scene represented a combination of the realism of Caravaggio, the psychological expressiveness of Annibale Carracci, and the bombastic, theatrical expressiveness of the new generation of Caravaggesque painters around Vouet, Baburen and Valentin – and Bernini.  Compared with Rubens his works were more delicate, with more emotive rhetoric. There is greater expressiveness in his portraits, and he was able to capture his sitters’ state of mind with tremendous facility. It was as if he has really achieved that combination of naturalism, with the magic ingredient of spirit, that had been missing from Caravaggio’s images, but present in Annibale’s studies from life. The present study of an old man was done from life but with the intention of using the features in one of his larger compositions – perhaps like the old man in the background of the ‘Taking of Samson’ in the Kunsthistorisches Museum, Vienna (and painted for one of Van Dyck’s Antwerp clients, Cornelis van der Geest). This kind of study expressed to the maximum the extraordinary ability to capture the soul of his subject, much as Annibale Carracci did before him, as in the study in oil on paper that the latter did of his father, Giovanni Antonio, in the early 1590s (Fig.   ), before the Bolognese painter set off for Rome where he would achieve his greatest fame working for Odoardo Farnese. Apart from the extraordinary facility that Van Dyck had with his materials, giving the same unerring and faultless impression of this thoughtful old man as Annibale sensationally achieved without apparent effort, he was thoroughly in tune with the idea of conveying a mood, and not just the superficial likeness. It was this that endeared him not only to his patrons in the Church, who could rely on him to produce really effective illustrations of the narratives and devotional feeling, but also to his sitters, who demanded ever more of his tremendous gifts to portray their likenesses. It is a particularly romantic idea, but perfectly plausible, that this study was indeed acquired early on by Charles 1st, for it was his enthusiasm, based on his experience of the painter’s abilities before he became King, that led to Van Dyck’s stay in England, where he arrived in 1632. Not only was this perhaps the most important visit by a painter to these shores, but Van Dyck left behind him a society changed in its appearance by an artist thoroughly appreciated by his host.

This kind of image was clearly impressive to Jan Lievens, who met Van Dyck in Holland when the latter visited The Hague in the winter of 1631/32, and painted a lost portrait of the young artist (known from Lucas Vosterman’s engraving in the Iconography (see exhibition catalogue, Jan Lievens Washington D.C, Milwaukee, Rembrandthuis, Amsterdam, 2009, p. 11 Fig. 11). It is interesting to see the ripples of artistic innovation pass from one centre to the next: Lievens was also drawn, through his contact with the Flemish master, to travel to London in his wake, and he may even have worked as his assistant.