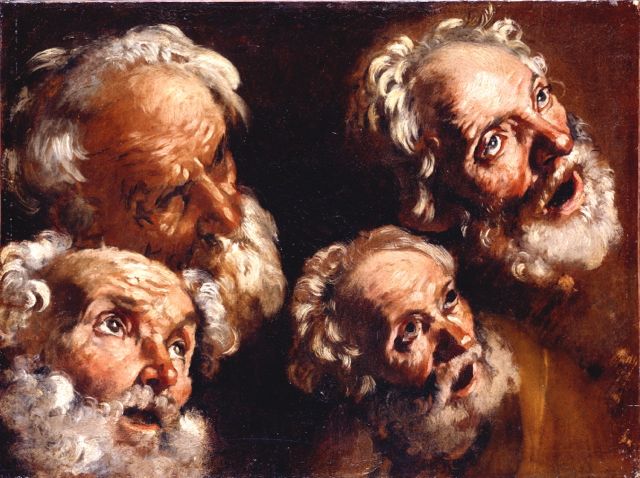 Four Heads: a study for the Navicella altarpiece in St.Peter’s

This wonderfully vigorous sketch is a study from the life, for the figure of St. Peter in the Navicella altarpiece in St.Peter’s, completed by Lanfranco in 1628.  This major commission, one of the artist’s landmark achievements and the one that is said by Passeri to have gained him Urban VIII’s nomination as Cavaliere dell’abito di Cristo, which indeed occurred in the autumn of 1628.  The commission was given in  1627, and by  September of that year the artist  was already working on the fresco, and it was unveiled on 17 September 1628.

As with Poussin, Sacchi, Domenichino, Vouet, Pietro da Cortona and the others so privileged, the commission for an altarpiece in St. Peter’s was a major stepping-stone in an artist’s career, particularly where church patronage was concerned, and so it is not surprising to find numerous studies from Lanfranco’s hand for this work.  Dr. Erich Schleier refers to a number of them in the catalogue of the exhibition Disegni di Giovanni Lanfranco  held at the Uffizi, Florence in 1983 (p.127-134).  This sketch relates specifically to the head of the central figure of St.Peter as it appeared in the fresco itself, and the other heads are all echoed in those of the other Apostles in the boat behind.  The iconography is somewhat rare (Luke, 21, 1-8); when the miraculous draugh

t of fishes occurred St. Peter who impetuously leaps into the water from the boat from which the brothers were fishing, and was rescued by Christ standing on the shore.  More familiar is the scene that Raphael made famous in the Sistine Chapel tapestry cartoons where Christ is seated in the boat as St. Peter kneels in front of him.

The altarpiece was the only one of the series, commissioned successively by Clement VIII, Gregory XV, Urban VIII and Innocent X for St. Peter’s, to be done in fresco.  It was a material which was, it turned out, unsuitable for the site, for already by 1640 Lanfranco himself was called on to repair it, and it continued to deteriorate from damp through the later years of the seventeenth century.  Eventually it was removed (before 1721) and replaced with a mosaic copy which is still in place; only fragments of the original fresco survive. Numerous copies of the composition were however made, and it was engraved no less that six times before 1800.

The altar of the Navicella was one of the altars in the navi piccole built and decorated during the pontificate of Clement VIII.

Because Peter alone had faith enough to venture out onto the water, the story illustrates his special relationship with Christ and his primacy over the other apostles. Of course the episode can also be understood on a symbolic level. The wind and waves that threaten the boat are manifestations of sin and temptation. As Peter’s faith falters, he sinks; but when he places his trust in God, he receives salvation.

To understand why the story of Peter walking on the water was included in the Clementine cycle, one needs to be aware that the subject had long been associated with the basilica, through a famous and revered image by Giotto.

When Clement VIII commissioned the altarpieces in the navi piccole, Giotto’s Navicella was still outdoors and was showing signs of damage after three centuries of exposure to the elements. Today the compostion is best represented in a drawing in the Metropolitan Museum of Art in New York.

Bernardo Castello painted the original altarpiece between 1604 and 1605. Apparently the work was not well received. Castello’s work has not survived. For Castello, an altarpiece in St. Peter’s was the high point of his career. When in 1626 he learned of plans to replace his painting with another version of the same subject by a different artist, he became frantic.

In August 1625, Giovanni Lanfranco petitioned the pope to paint the altarpiece in the New Sacristy. His request was denied, and instead Urban VIII assigned him the job of replacing Castello’s altarpiece with another version of the same subject.

Lanfranco began work on the altarpiece in 1627. In view of the deterioration of Castello’s altarpiece and of the other five altarpieces painted on slate, Lanfranco opted for a different medium and painted in true fresco. The work was completed by September 17, 1628.

Despite the fact that it was painted in fresco, Lanfranco’s Navicella soon showed signs of deterioration, and in 1640 the artist offered to return to Rome in order to “improve” it. The work was restored in 1662 by Raffaele Vanni and again between 1687 and 1694 by Giuseppe Montano. By 1721, it was detached from the wall in an operation that was only partially successful, as the upper portion of the composition was lost in the process, and transferred to the benediction loggia, where it hands today. In 1726, a mosaic replica of Lanfranco’s original painting, executed by Pietro Paolo Cristofari after a cartoon by Niccolo Ricciolini, was installed over the altar. A year later, in 1727, Pope Benedict XIII dedicated the altar to God in honor of St Peter, placing inside it relics of Sts. Mansuetus and Honestus.

The History of the Navicella

The original mosaic of Navicella in the atrium of the Old St. Peter’s in Rome, now almost totally lost, is attributed to Giotto. It was commissioned by Cardinal Jacopo Stefaneschi, without a doubt the leading artistic patron in the papal court of the first half of the fourteenth century. Originally in Rome under Boniface VIII, then in Avignon after the move there of the papacy, he was responsible for some of the most important artistic undertakings of the day.

The giant mosaic was originally situated on the eastern porch of the old St. Peter’s basilica and occupied the whole of the wall above the entrance arcade facing the courtyard. It measured approximately 13,5 x 9.5 m, and depicted on its uninterrupted surface St. Peter walking on the waters. Unfortunately, this extraordinary work has been destroyed in the course of its history. During the construction of the new St. Peter’s in the 17th century it was moved several times to a different location, resulting in smaller and greater losses.

First, the inscription disappeared, and only two fragments of the framework survived – an angel in the Vatican Grottos, restored almost beyond recognition, and another equally heavily restored angel in the church of St. Peter at Boville Ernica. Even greater losses among the figures followed – especially that of Peter – until the mosaic was finally installed inside the church in 1628 to protect it from the effects of the weather. Prior to this, Francesco Berretta was commissioned to make an exact copy in paint. But the mosaic did not stay for long even on the interior facade of St. Peter’s. Another change of location, its ultimate loss and a Baroque reproduction mark the further fate of the work up till 1674.

Today it is Lanfranco’s Baroque version of the Navicella that we see in the entrance area of St. Peter’s. The mosaic was already called the Navicella, or “little ship” when a copy appeared in the church of St. Peter in Strasbourg in 1320, or when it was drawn by Parri Spinelli about 80 years later. From the 14th century on, many pilgrim guides mentioned it by this name. People were impressed by the large boat, which dominated the scene, and whose sail, filled by the storm, loomed over the horizon. Such a natural representation of a seascape and of a ship in trouble was known only from ancient works of art, if at all. Together with the mosaic’s brightness, the effect must have been overwhelming – enthusiastic reports of the Navicella by worshippers testify that this was so.

Oil and other preparatory studies

Studies such as this are rare in seventeenth-century painting, although one can cite the instances in Rubens, van Dyck’s and Annibale Carracci’s work.  Lanfranco himself occasionally also did single heads as preparatory studies, like the examples in the Museo Correale in Sorrento, which Prof. Nicola Spinosa kindly drew to our attention.  These date most probably from Lanfranco’s years in Naples in the 1630’s and 1640’s, but have an identically lively handling. Another close comparison is with painting in the Christ Church Picture Gallery, Oxford.  One of the heads has been recognised as a preparatory work for the Assumption of the Virgin now in the Bayrische Staatsgemaldesammlungen in Munich, whilst the other bears a striking similarity to the head of St. Matthew  in the fresco in Certosa di San Martino in Naples.

There are a number of drawings that also exist for Lanfranco’s altarpiece that just go to show how seriously Lanfranco prepared for this important commission. The fluid brushwork in the Louvre drawing echoes the lively brushwork that becomes even more evident in the X-ray of this sketch. The artist is constantly reworking his original design whilst developing each aspect of the composition.

Another interesting comparison of the technique Lanfranco adopted for this fresco can be seen in the comparison between the head of St. Peter from the fresco in Certosa di San Martino in Naples and this oil sketch. Lanfranco is clearly working in the same fast and fluid technique demanded by fresco as he is on this canvas sketch. Fluidly applying paint using similar highlighting on each nose and forehead, and at the same time marking out the wrinkles on the saint in a similar manner.