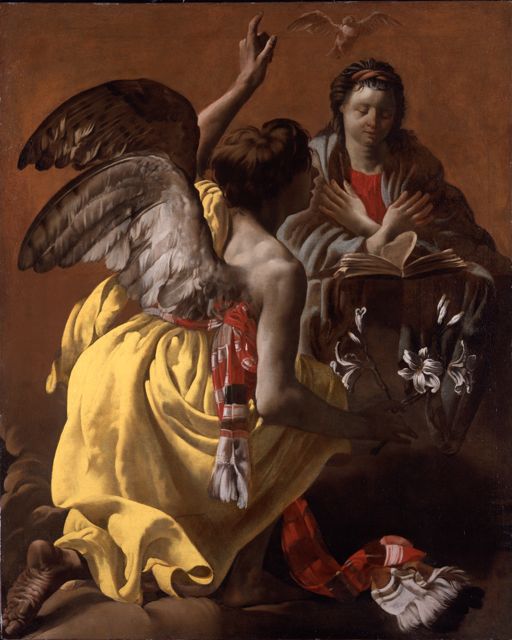 A subject such as this Annunciation is unusual in seventeenth century Holland, and although Nicolson believed that ter Brugghen came from a Catholic branch of his family, this has since emerged not to be the case; his was from a Protestant family in The Hague.

Only one other Annunciation by the artist is in existence, and that is the large picture now at Diest, which is signed and dated 1629, the year of the artist’s death.  The present picture must be some five years earlier than the Diest picture, reflecting as it does strong Caravaggesque elements and a proximity to Dirck van Baburen in the earlier 1620’s.  Ter Brugghen is generally believed to have made a second trip to Italy (his first and lengthy stay was from 1604-14) in 1620/21.

Prof. Slatkes has suggested in the catalogue of the Masters of Lightexhibition (loc.cit. above) that the Diest Annunciation was almost certainly painted for the Begijnhofkerk in Diest, and so cannot be the picture referred to in a 1638 transaction Nicolson associated with it.  Prof. Slatkes associates the present painting with theLiberation of Saint Peter in the Mauritshuis, The Hague, which is dated 1624. “it now seems likely that several motifs in The Hague painting are indebted to Baburen’s lost 1623 Annunciation, known through a copy by Jan Janssens … in Ghent.  Thus, both the shadowed profile of the angel and the commanding gesture relate back to Baburen.  About the same time … and probably not much later than 1624, Ter Brugghen painted an Annunciation [the present picture] which, although indebted to the Baburen in many of the same elements present in The Hague work, utilizes a strong diagonal composition unusual for the theme”

The picture emerged from a Scottish private collection at the end of the 1950’s.  Recent cleaning has brought to light the intensity of Ter Brugghen’s Caravaggesque realism, the idiosyncrasy of the feet and hands having been quite unnecessarily disguised. Many of the subtleties of the artist’s chiaroscuro were misinterpreted, and some unnecessary embellishments added.  In reality, few of Ter Brugghen’s works show as masterly a use of colour and reflected light, something that was not as much appreciated a generation and more ago.