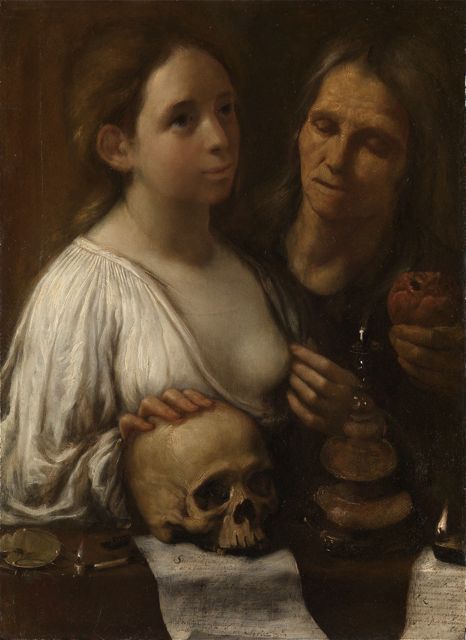 The painting is a beautiful example of a Seicento poesia, and it comes as no surprise that its author was also a poet. It was recognized as the work of Gabrielli by Dr Andrea G. De Marchi, who saw the comparison with his work, especially with the Sewing Lesson in the Musei Civici, Padua (1), which is a similar two figure composition with very much the same painterly manner.

Although Gabrielli is not so well-known in the mainstream of Seicento painting, he has an ample bibliography, and there are many works of his in the environs of his native Messina (2). He was at first apprenticed (for six years) to Domenichino’s pupil Antonio Barbalonga, but after leaving Sicily for Naples, he arrived in Rome and studied with Nicolas Poussin. When the latter set off for Paris (1640), Gabrielli turned to Pietro da Cortona as a teacher, so he had a wide variety of artistic education even before he travelled to northern Italy and stayed nine years in Venice. Again according to F. Susinno (Vite dei pittori messinesi MS 1724, published by V. Martinelli, Florence, 1960, p. 262-274) he travelled widely in northern Italy, to Mantua, Padua and Ancona before returning to Messina in 1651; he also fled to France in 1678 during the anti-Spanish revolt, returning later. L. Lanzi (Storia Pittorica dell’ Italia, 1789) recalls a number of panel paintings by Gabrielli in Padua, none of which has so far been identified. While the altarpieces he did in Sicily form the bulk of his known work, the allegorical and poetic works, of which this Vanitas is a singular example, were more likely painted in northern Italy, and it may well be recognized as one of the paintings done for his chief patron in Padua. The present work is actually on an oak panel, itself exceptional for an Italian picture.

Gabrielli was a poet and musician, as well as being versed in alchemy, and several of the paintings described by Susinno had accompanying verses. The text of the verses on the present panel is difficult to read completely, but begins with the title La Vanità. It recalls an anecdote recounted by C.D. Gallo(3) of his patronage by Conte Borromeo, who wanted his eldest son and two daughters to learn painting from him. One of the latter in return painted the portrait of the master, with flowers beside the sitter. Onofrio returned the compliment, and painted his pupil, who was a comely young girl, and next to her he painted what Gallo describes as ‘alcuni deformi demoni’. She was shocked by the juxtaposition, ‘but our painter explained candidly, and in the presence of her father the count, that instead she had no reason to be disturbed, for a beautiful face gained from having these deformed and hideous features next to it, following that saying that ‘opposites placed next to each other enhance each other’ and recalling the verses of Martial to Fabulla. Omnes aut vetulas habes amicas / Aut turpes, vetulisque foediores / Has ducis comites, trahisque tecum / per convivia, porticus, theatra. / Sic formosa Fabulla, sic puella es. (M. V. Martial, Epigrammata, VIII, 79).

The sources of Gabrielli’s poesia are manifold, in both literary and pictorial terms. If the Girl sewing in Padua (painted, we know, for the Conte Borromeo) recalls the colouring of Strozzi, whom he perhaps met in Venice, the impasto and style is here more reminiscent of Lodovico Carracci, with an echo back to Giorgione’s Laura now in the Kunsthistorisches Museum, Vienna. The gesture of opening the fur mantle to uncover her breast points to fertility (and, therefore, maternity), as an offer of love and seduction, and this offer is enhanced by the shocking juxtaposition of the old blind woman holding a heart, which gives the viewer an immediate frisson. Conte Borromeo apparently accepted the explanation amid much laughter, and the painting was left as it was. Onofri was also much taken up with alchemy, hence the guttering candles and the scales in the foreground: Gallo recalls that he took refuge in the convent of San Francesco di Paola in Messina for a long time, and devised a plan to divert the two streams which menaced Messina from time to time.

It is interesting that the re-appearance of this work points to the possibility that other more famous paintings of blind people may be also by him. These are the series of six paintings on paper, laid on canvas, that were first published by Anna Ottavi Cavina in 1987 (4) of which only two are widely known. The one illustrated here, has very much the same way of working paint as in the Vanitas, corresponding in fact with Susinno’s description of his working method. “He blamed his hand for being too quick to follow his imagination, consequently he had an extraordinary speed and freshness of brushwork, every delay seeming to be a thousand years, in realizing his ideas, so he employed but little paint which he spread with liquid and oily strokes. He frequently used the colour of the canvas for a half tone, and he made use of all sorts of supports (qualunque sorte di male tele). The poetic conceit of a shocking visual contrast is also a keynote of one of the Blind Women, for in the corner is a vivid and telling depiction of an eye, which triggers the same philosophical reflection on a sightless existence that is the subject of the image.

(1) Published by R. Pallucchini, La pittura veneziana del Seicento, II, Milan 1981, 2nd ed, 1993, Fig. 972.
(2) There was a monographic exhbition devoted to Gabrielli’s work in Messina in 1983.
(3) C.D. Gallo, Annali della città di Messina, 1756, ed by A Vayola, Messina, 1882, IV, p. 82-83
(4) Washington Symposium on Emilian Painting in the Sixteeenth and Seventeenth Centuries Jan. 1987, ‘Studies from Life: Annibale Carracci’s paintings of the blind’. See also A. Ottani Cavina ‘Annibale Carracci’s paintings of the blind: an addition’. The Burlington Magazine, CXXXI, 1989, p. 27/28. The paintings are said to have come from the Paleotti family in Bologna, and much has been made of the presumed connection with the Compagnia dei Ciechi in Bologna.